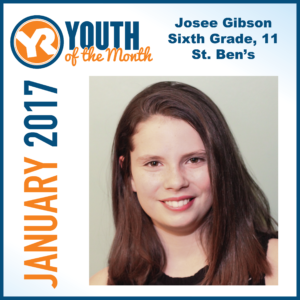 In December, St. Benedict Cathedral School was beginning its holiday coat drive to support those in the community who would be in need of more warmth headed into the teeth of winter.

“I was at the store and I saw a pair of gloves that was only a dollar and I was like ‘Well people don’t just need coats, so maybe I should collect other items too,’” said Josee Gibson, a sixth-grade student at St. Ben’s.

Gibson, 11, jumped into action and the result was three bag loads of winter wear for the Evansville Rescue Mission (ERM) and Evansville Christian Life Center. Her spirited initiative and service-oriented mindset has earned her recognition as Youth Resources’ January Youth of the Month.

“On her own accord, she came to our administration asking if we could also have a glove, hat and scarf drive in conjunction with our coat drive,” said assistant principal Jon Day.

After meeting with administration, Gibson turned a large cardboard box into a giant Christmas package that St. Ben’s students and parents could walk by and drop donations in. Gibson, with the help of Day, and her friends Isabelle and Jonica, created flyers to hang around the school, arranged for announcements to be made and spread the word.

“I felt really good because (ERM) was really excited when I showed up,” said Gibson. “They were like ‘You’re going to help a lot of people.’”

Gibson also donated some of the collected gloves, hats and scarves to the Evansville Christian Life Center – where her excitement for service was initially born in 2015 as the Gibson family delivered Thanksgiving meals together.

“As we get older we’re going to have to learn what is right and what is wrong,” said Gibson. “As students gave they began to understand something that is right – helping others.”

To nominate a student (5-18) for Youth of the Month, click here.