April Youth of the Month Passionate about Serving Others

In a few weeks, Mater Dei High School senior and Youth Resources’ April Youth of the Month, Abbey Chapman, will see months of work and planning culminate with a five-hour dance party featuring many of her fellow students.

Mater Dei’s Dance Marathon is in its eighth year, and while the event is a lot of fun, its purpose is more important: to raise money for Riley Hospital for Children in Indianapolis.

“Riley is particularly close to my heart, in part, because my older brother was seen there by specialists when he was young. He was born with a concave breast bone which put pressure on his heart and lungs. My parents took him to see specialists several times until it was determined that the condition was self-correcting as he grew and he would not require surgery. In addition, my sweet cousin, Dennis, was born with a rare brain condition called Miller-Dieker Syndrome and has seen specialists at Riley for many years,” said Abbey. “Because of all the families that Riley has impacted, and the lives that I have personally seen changed by their work, I believe the very least we can do is give what we can to Riley through our MD Dance Marathon fundraiser.” 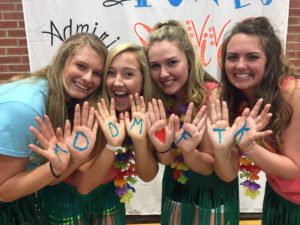 During her time at Mater Dei, Abbey has raised more than $1,500 for Riley. This year, she and Memorial High School student Samantha Pauli saw an opportunity to make an even greater impact by joining forces. They helped organize a Mater Dei/Memorial throwback-themed fundraiser dance following a basketball game in January. Abbey says Mater Dei’s student council plans to make the dance an annual tradition.

Though Mater Dei’s Dance Marathon (MDDM) is the most significant service project Abbey is part of right now, it’s far from the only one. The senior class president and student council member is active in Youth Resources’ Teen Advisory Council (which requires members to complete 15 hours of service each semester) and is a member of TEENPOWER Youth Staff. She volunteers at Jacobs Village and the Dream Center, serves as a student ambassador at Westside Catholic School and takes on several other leadership roles at Mater Dei, including captain of the tennis team. She is also active at St. Boniface Catholic Church.

“I am so proud of everything Abbey is and does. She is a joy to work with. She is well respected by her classmates, her teachers and school administrators. She is friendly, conscientious, and of great moral character. Our motto at Mater Dei is ‘Enter to learn. Go forth to serve.’ Abbey is the perfect example of both learning and serving,” said Mater Dei math teacher and student council advisor, Jeanne Thomas.

Abbey’s accomplishments and willingness to give back prompted her older brother, Jordan, who now lives in St. Louis, to nominate her for Youth of the Month.

“Abbey may be my sister, but she is also one of the finest people I know – truly an example of ‘do unto others’ mentality,” Jordan Chapman wrote in his nomination. “Abbey is, and always has been, a leader among her peers. Whether it’s the effort she puts forth in her school work, her willingness to take the lead in extracurricular projects, or her determination to adhere to certain values in her personal life, she has ALWAYS led by example.”

“It means so much to me that an organization close to my heart is recognizing me as Youth of the Month! Youth Resources has given so much to me, including increased confidence in my leadership abilities, security in who I am as a person and a loving home. It is hard to put into words how grateful I am for YR and all those I have met who have impacted my life in so many amazing ways,” said Abbey. “Along with this, being nominated by my older brother, who has always been a great friend and role model, makes it even more special.”

After graduation, Abbey will head to the University of Evansville to begin working toward a degree in physical therapy. With the importance she places on helping kids through MDDM, it may be no surprise that Abbey plans to specialize in pediatric physical therapy. She also wants to continue serving the community through involvement at UE and Youth Resources.

“Youth Resources has spurred my passion for servant leadership,” Abbey said. “Service through YR has opened the door to meeting many wonderful people who also enjoy service opportunities, which makes the experience even more worthwhile.”

Abbey would love your support as she prepares for Mater Dei’s Dance Marathon on April 20. You can make a contribution by clicking here.