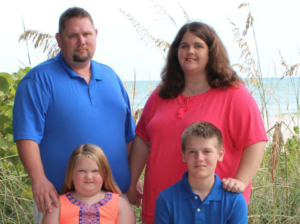 The time I have spent in YR for the last 24 plus years is really broken down into three separate stages: student, adult and parent.

As a student, I attended my first TeenPower as a camper in 1993. I instantly fell in love with everything about TeenPower. It was truly a life-changing experience for me. I had never felt more at home or able to just be myself than I did that week. I spent the next two years on Youth Staff and continued to make life-long memories and friends. My first year on Youth Staff a group of us took a trip to Michigan to serve as Youth Staff for MADD Michigan’s TeamSpirit camp. I also spent two years as a member of Teen Advisory Council. High school, as for most people, was a time in my life that really formed my future.

Without TEENPOWER I can say, without a doubt, my future would have looked a lot different than it does today. I ended up with a degree in Mass Communications with an emphasis in radio because fellow Youth Staff member, Bernie Schmitt, introduced me to radio his freshman year at UE. Former Adult Staff member (and Sheriff, and Congressman) Brad Ellsworth helped guide me to the job I’ve had for the last 13 ½ years at Evansville/Vanderburgh Central Dispatch. I wouldn’t have had a connection with either man that really helped form my future without TeenPower.

As an adult, I have had the opportunity and pleasure to serve on Adult Staff at 14 High School and 12 Middle School TeenPowers. I have always said, and it has always been true, that “TEENPOWER gives back to me more than I could ever dream of giving to TEENPOWER.” It was true as a teenager and it is true as an adult. Over the years it has been an honor to work with so many teens. I have watched many of them grow from middle schoolers just finding their way, to high schoolers coming into their own on Youth Staff, to college students helping their younger peers facilitate TeenPower camp, to college graduates and young married folks starting their lives in this crazy world and even a few who are now parents.

That leads me to my favorite stage, as a parent. My kids, Drew, 13, and Emma, 8, have grown up always knowing TeenPower in their lives. They have been welcomed, included, and loved. As a parent, you dream for your kids to find things in their life that they love and if you’re really lucky you get the chance to share those experiences with them. The last two years Drew had the privilege of being a camper at Middle School TEENPOWER and I have had the privilege of sharing both weeks with him. I cannot put into words my pride in his love for TEENPOWER. It is unquestionably something that I cherish and always will. I look forward to both my kids one day applying for Youth Staff and hopefully getting to share that experience with them as well. Drew has also participated in Teen Court and loves being involved with it. Next year he enters high school and will be involved with Teen Advisory Council. Before I know it, Emma will be given the same opportunities to find her niche in YRs programs. Youth Resources is an amazing organization.

YR is the future of Evansville growing into leaders today. I believe in those two statement enough that I spend much of my time and treasure to support YR. My wife, Kimberly, and I made the decision years ago that I would take two weeks of my vacation time every summer to be involved in TEENPOWER. As parents in today’s world, we firmly believe that YR and TeenPower are vital to the youth in Southwestern Indiana. We are happy to be raising our kids to be future leaders with the help of so many awesome teenagers in these programs.

BEN was named Outstanding Alumni at the 2016 Hall of Fame banquet. Aside from sharing his time and talents with YR, he also actively volunteers with the Boy Scouts, Tiger Archery and St. Benedict Cathedral and School. Ben works at Evansville/Vanderburgh Central Dispatch as a Dispatcher (Telecommunicator). His YR involvement over the years includes HS TEENPOWER 92-95, 01, 05-present, MS TEENPOWER 06-present, TAC 93-95 and Teen Court 2017-present.