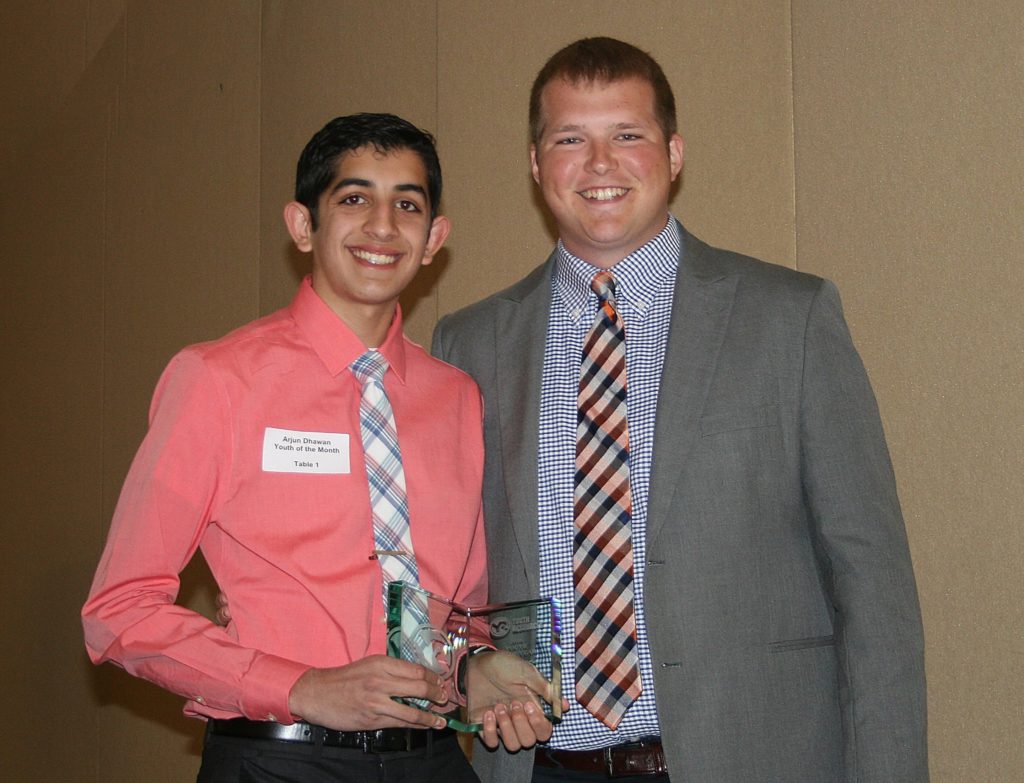 Youth Resources named 16-year-old Arjun Dhawan as its 2016 Youth of the Year during its 22nd Annual Hall of Fame Celebration, sponsored by the Vanderburgh Community Foundation, on April 13, 2016 at the Holiday Inn Airport.

Dhawan was tabbed Youth of the Year by Youth Resources’ Board of Directors as a result of his innovative service through building devices to serve the visually impaired and distracted drivers, along with his active leadership in many school clubs and YR’s Teen Advisory Council.

Dhawan has a patent pending for his device called “The Third Eye”, which uses a 3-D sensor to identify objects in the room via auditory command. He is presenting his newest invention, a distracted driving sensor capable of recognizing manual, visual and cognitive aspects of driving, at the 2016 Junior Science and Humanities Symposium at the end of the month.

Dhawan, a junior at Signature School, was one of many outstanding youth volunteers recognized at YR’s fundraiser designed to highlight the accomplishments of youth and adult volunteers in the community. Dhawan was joined by Cedar Hall’s Charles Williams, North Posey’s Lindsey Koester, Scott Elementary’s Molli Pearson, Memorial’s David Thompson, Reitz’s Lainie Grubbs and Castle’s Austyn Stierwalt as 2016 Youth of the Year finalists. All finalists were named Youth Resources’ Youth of the Month winners during the 2015-16 school year.

Randy Brown received Youth Resources’ Outstanding Volunteer award for his commendable work as an adult advisor in the Teen Advisory Council. Brown, an extension educator with 4-H Youth Development, has volunteered with YR since the organization began in 1987.

Ben Early and Kellie Forney were both tabbed Outstanding Alumni for their exemplary service with YR and around the community. Early attended TEENPOWER in 1993 while Forney first attended in 1998 – both have volunteered their summers as staff members at TEENPOWER since. Both Early and Forney are also active with youth outside of Youth Resources, as Early assists with the Boy Scots, Tiger Archery and St. Benedict Cathedral and School , while Forney teaches kindergarten at Cynthia Heights and volunteers with youth within Holy Rosary Catholic Church.

To nominate a student (5-18) for Youth of the Month, click here.