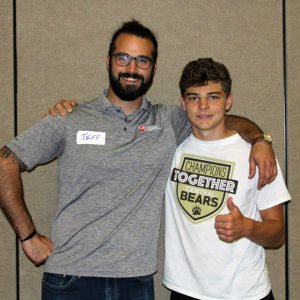 Q. You have a memorable hairstyle. How long have you been growing out your hair?
A. Just over a year now.

Q: Why did you decide to do this?
A. Partially out of laziness and not liking to get my hair cut or pay for haircuts. And also, just I don’t know, wanting to do it and donate it was a big reason to let it get this long. Obviously now it’s long enough to donate, and I still haven’t cut it, so maybe some attachment issues as well.

Q. What kind of shampoo do you use?
A. Right now it’s Pantene, and I don’t really use shampoo that often. I shampoo my hair like once every two weeks, twice maybe, depending on how active I am. But it’s, mainly, I just condition it to make sure it’s clean. If I wash it, the thick hair takes over and it becomes like a huge poof of hair.

Q. If you could change one thing about yourself, what would it be?
A. I’m a yes man, which I somewhat enjoy, but sometimes it is a hindrance in the sense of, I don’t get to do some of the things I probably would like to do or am not as well rested as I probably should be because I said yes to too many things the night before. Maybe that would be one thing I’d like to change. I have the ability to say no, but I’m not comfortable saying “no” to things. I want to do it all. Kids have said it’s FOMO, Fear Of Missing Out, is something that I deal with. So, maybe taking care of that a little bit more and being ok with missing out on something.

Q. Who is someone that inspires you?
A. There’s a couple different people. In the social media/photography/videog-raphy/vlogger world there’s a guy named Peter McKinnon who, I don’t know, I just love his content. He’s very educational and doesn’t hide the way he does things, and he also shares his struggles throughout the years. He’s very open with himself. He’s just a very hard worker, and he gets a lot of stuff done. He is someone that I look up to in the sense of, he knows what he’s doing, and if I need help with anything I can pretty much Google or YouTube his information and learn from him.

But someone else I look up to who is a good friend of mine who was here [at Youth Resources] is Jeremy [Brown, former TEENPOWER Coordinator]. Jeremy is someone that, I don’t know, just a good friend of mine, just seemed to have his life more together and was always super encouraging in how he interacted with the students and how he takes the thought and the care into things for the students as well.

Q. Are these secret plans?
No, not really. I’m really into music, and I obviously have a desire to help kids in any way, shape or form. So coming to YR, if I won the lottery real big, I had this dream of building a YR skyscraper here in Evansville. The dream would be that each program would have their own floor, and we’d have our own offices and down below there could be a floor where there’s basketball and gyms where the kids could hang out.

But also with my love for music, I thought about building a music venue here in Evansville…smaller venue area where it’s a great place to come and see good music. You could even have local shows in there that are even smaller. But, like a coffee shop attached to it, and then maybe even a place for kids to come and hang out. Just right next door there’s a place in Nashville, RocketTown I think is what it’s called. It’s a skate park on one half and then the other half is a music venue. That’s kind of where that idea comes from: a place where kids can come skate, play ball, whatever, and then on the other side of the building whenever there is an opportunity to have music to have it there. And that’s just my dream. And if the lottery happened, that’s what I’d do.

So, who to call, I don’t know for sure. But, probably call mom. Or my brother. My brother’s pretty financially sound so he might help out. Someone’s gotta help me out.

Q. You’re in an elevator with a stranger. Do you keep quiet or start a conversation?
A. I can’t keep quiet ever, so definitely start a conversation. About what, who knows. But I feel like everyone has a story. If you’re in an elevator with someone, instead of sitting on your phone and worrying about what’s happening in someone else’s life on social media, there’s someone in front of you with the opportunity to tell you what’s going on in their lives that lives here in your community. Who knows what the opportunities may bring about, but it’s just comforting to know that someone wants to talk to you and know what’s going on.

Q. What should adults in our community know about our youth?
A. So, a couple years ago there’s a quote that someone said is, “Right now the youth are only 25% of our population, but they’re 100% of our future.” And so these are the people we need to be encouraging to do big things and leading and pouring into and learning from in other ways as well. There’s gonna be new things that our youth are gonna have to teach us as we get older. And it’s kind of scary. I’m only 27, but sometimes I get called “grandpa” because I don’t know things. So just learning from them as well and not seeing them as people we have to teach all the time and being taught by them because they’re living lives as well. They’re growing up, we’re growing up, but, you know, pouring into them is great and leading them is great and encouraging them in any way, shape or form is awesome, but also seeing the ways they also encourage and shape us and the people we are and being thankful for that. But yeah, just learn from your youth around you instead of trying to teach them all the time.