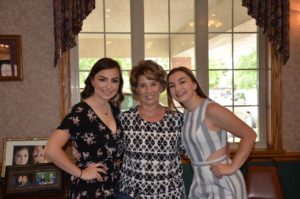 My YR story began in 1987, the year of Youth Resources’ inception, when the McGary student council applied for a Make A Difference grant to create an area to rest and eat at Mesker Park Zoo. My involvement in that project ignited a lifelong interest in service that has ended with me being a teacher, coach, and principal in the Evansville community.

In 1987, I probably would’ve been considered at risk by my teachers: I attended a high poverty school and was being raised in a one parent household where the adult had to work all the time to support us. Fortunately, there were adults at school and YR who wanted to encourage and support me. Leadership in my high school was largely about popularity, and though I was president of the student council at my middle school, I wasn’t even elected to student council in high school. I was an athlete, but I was not very sure of myself, and that could have been a negative turning point for me. Luckily, Youth Resources Teen Advisory Council was an option for demonstrating leadership and I began to attend meetings. Phyllis Kincaid and Jean Rickard were two of my mentors and number one fans. In addition to my mom, they ensured that I had multiple opportunities for success, and that I believed in myself.

I had many firsts with YR: my first trip on a plane, my first time to speak at a conference, and my first time to have to introduce someone famous, Erma Bombeck. I also was on the first TEENPOWER Youth Staff and College Staff. I had the opportunity to serve on a statewide youth council for the Indiana Youth Institute, which included being staff at a statewide leadership camp. As a result of these early endeavors, my self-esteem increased and I became comfortable speaking to groups, confident in my abilities as a leader, and focused on how I could help others with my life. I was speaking at a YR event as a college student when I was offered my first job.

The most awesome part of YR is that it has endured in a way that has allowed me a lifetime of involvement. I have served on the YR Board of Directors, and as a teacher I was able to take my own students to TEENPOWER and create a group that performed for more than 4,000 students and families, advocating for a drug free lifestyle and making positive choices.

I wish people knew how connected YR makes people feel. Now that my own daughters have had the opportunity to be part of this organization, it reminds me how important it was to have other teens in my life who were committed to being a positive influence in the community. There are so many opportunities to make the wrong choices in adolescence, but YR makes it cool for students to connect and be a positive force in Evansville.

YR gives young people a voice, and encourages them to be actively involved in improving their community. It connects youth from all schools and all walks of life with an effort to serve and improve our city. It was Margaret Meade who said “Never doubt a small group of thoughtful, committed people can change the world. Indeed, it is the only thing that ever has.” And that is exactly what YR is doing for our community, growing thoughtful, committed young people who will change the world for the better.

Tamara Skinner is the principal at Glenwood Leadership Academy and former French and English teacher at North High School. She has been involved in YR in some way since its inception in 1987 as a grant recipient, member of TAC, president of TAC for two years, member of the first TEENPOWER Youth and College Staffs, and now as a member of YR’s Board of Directors.

To make a gift in honor of life-long community advocates like Tamara, visit youth-resources.org/YRday.