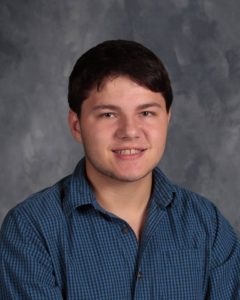 June’s Youth of the Month Garrett DiDomizio has devoted much of his high school career to volunteering and quietly leading those around him. The 18-year old recent graduate of Reitz High School was described as “determined, hard-working, and authentic.” After reviewing the lengthy list of his volunteer efforts, we’d also add “giving” and “leader” to that list.

“He’s always been the first one to volunteer – the one people call on and count on – because they know he’ll get the job done with a smile and no complaints,” Kathryn DiDomizio says of her son.

During his time at Reitz High School Garrett served as a Media Assistant and was the webmaster for the Thespians troupe. He was a key player in building the sets, working the light board and meeting other technical needs for the theatre productions throughout the year.

“My involvement with theatre started in middle school. During my first production, I did scenic construction and was able to learn more about using power tools and how to be handy in that fashion. I really enjoyed being involved on crew and felt a calling to stay there and continue to help with the productions. My senior year, I did a great deal to make the sets come together and bring the director’s vision to life on stage. I was so delighted to be a part of the program that I took every second I could to help where I was needed, whether during a production or not, and stayed late a lot to make sure things got done,” Garrett said.

Before graduation in May, Garrett devoted several weeks to mentoring younger students on how to do these tasks once he graduated. He was awarded the Globe Award at Reitz for his theatre involvement, an honor voted on by his peers. 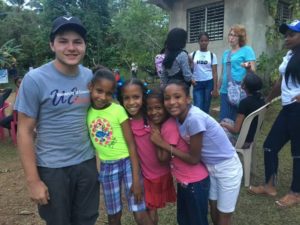 Garrett is also very involved with his local Boy Scout troop, first as a member and now as an adult leader.

“I think the leadership activity that has had the greatest impact on me is my involvement in Boy Scouts,” Garrett said. “Boy Scouts has taught me a lot about leadership in being able to lead other members of my troop and teach them new things. Scouting emphasizes service, and being a Scout helped me get more involved in my community and hooked up with different organizations through which I could serve. I have gotten very involved helping at my church and serving others through programs there also.”

Garrett’s involvement with Boy Scouts eventually led him to the completion of his Eagle Scout project: building a  shed for Christian Fellowship Church, which was needed for the preschool there. Eagle Scout is the highest achievement or rank attainable in scouting. Since its inception in 1911, only four percent of Scouts have earned this rank.

“We were so proud to see Garrett complete his Eagle Scout project. It was a huge undertaking, and he worked so hard throughout the planning and construction of it,” Kathryn said.

“The program helps brighten the holidays for families who are dealing with the trauma that comes when a family member that has AIDS, so I found it to be a very worthy cause. Helping with the AIDS Holiday Project Celebrity Dinner is particularly memorable because in doing so I have been able to interact with prominent members of our community, as well as have fun helping with the auctions that happen as part of the event. This memory is one of my favorites because it has been something I have done from a young age.” 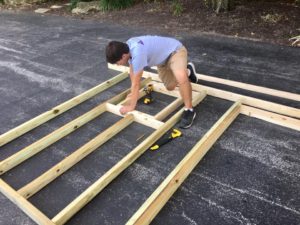 When asked why service to others was so important to him, Garrett simply said, “I truly love being able to serve in the community and make a positive difference in others’ lives.”

Garrett attends Christian Fellowship Church, where he is involved with the middle and high school ministries and often runs the lighting for their weekend services. He also recently served on a mission trip in the Dominican Republic with his church group, where he worked with teens there to help construct a community center. When he has free time, he enjoy reading, watching classic television shows, and spending time with his friends.

Garrett will attend University of Southern Indiana this fall, where he plans to study Mechanical Engineering.